Tropical Immersion:
A Year in Costa Rica and Beyond
by Ethan Rogol


Everyone knows that Costa Rica is a paradise. But how does one find one's way around when streets have no names and houses have no numbers? When does one shake hands, and when does one kiss one's friends? "Tropical Immersion" is the wry and very personal story of a year in Costa Rica, the overland journey there and back, and side trips to Nicaragua and Ecuador. It details navigating the rough, narrow, busy Costa Rican sidewalks and learning to see doing so as a sport, eating fruit that smells like bodily fluids and discovering that it tastes delicious, and learning to respect "reckless" Mexican bus drivers, whose driving could be described by the uninitiated as "terrifying"— by deciphering their clever use of turn signals. The book offers a feast for the senses: rich, earthy aromas, warm wind on the skin, the bitter taste of dust in the air, the sound of birds, insects, children laughing, mothers calling their names, and laborers working the land. Its focus is not sightseeing but "culture-diving"; not ogling or conquest, but participation and integration. It is part travelogue, part cultural primer, part memoir, part romance and a treatise on the being present, wherever one is. 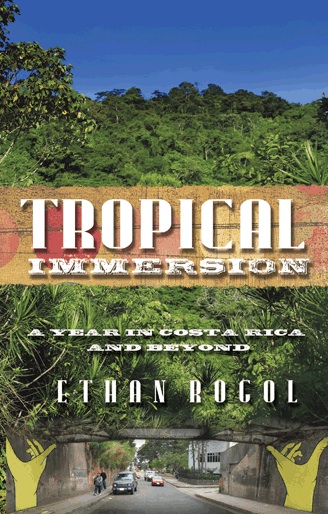 REVIEWS
"Tropical Immersion is uproariously funny and tender in its honesty, as well as forthcoming with insights into the social nuances of life as an outsider.... Rogol... recounts tales of an angsty youth [and] compares and contrasts the idiosyncracies of his own country's political systems and social norms with that of Costa Rica's, always with a keen sense of awareness and humor."
—Giovanna Marcus, Olympia Power and Light
"There's more to Costa Rica than a beautiful coast. Tropical Immersion: A Year in Costa Rica and Beyond is a travel memoir covering Ethan Rogol's year he spent in Costa Rica, gaining a deeper appreciation for the place than as a simple tourist. Culture, customs, and more, Rogol will educate readers on the deeper Costa Rica they don't know about. Tropical Immersion is a top pick and solidly recommended read."
—Willis M. Buhle, Midwest Book Review
Back to top